South Africa’s Fynbos Biome is one of the most biodiverse environments on the planet. It forms part of the Cape Floristic Region (CFR) which in a land area of similar size to Malawi or Portugal is home to more than 9,000 species of vascular plants, of which 69% are endemic to this area, thus meaning they occur nowhere else on earth. It is recognised as one of the world’s biodiversity hotspots and is also a UNESCO World Heritage Site, placing it at similar heritage status to the Galapagos Islands and the Grand Canyon. These are just some of the special plants that call the Fynbos Biome ‘home’. 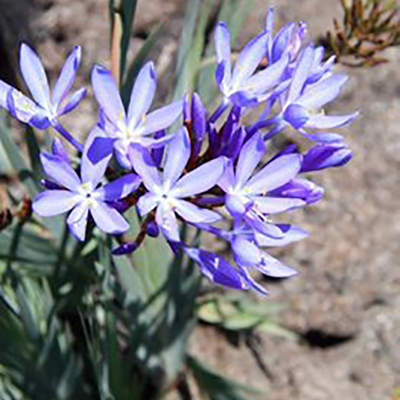 Nivenia stokoei is named after the botanist Thomas Pearson Stokoe who collected it in 1921 near the mouth of the Palmiet River. This extraordinary gentleman climbed mountains until the age of 91 and discovered nearly 150 plant species new to science. At the time he said: “Surely no blue in heaven could be more pure and beautiful….there was I with the Gods on their own ground, feasting my eyes and drinking in healing balm to my soul”. #Fynbos  #Kogelberg  #Overberg 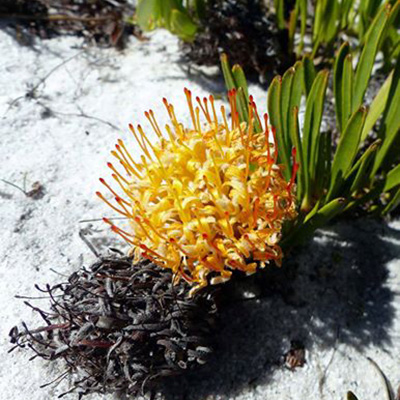 Leucospermum hypophyllocarpodendron is also known as the snake-stem pincushion. It forms part of the ‪#‎Proteaceae‬ family. It has a prostrate and spreading habit. It occurs on lowland sandstone ‪#‎Fynbos‬ and is distributed from the ‪#‎CapePeninsula‬ across the ‪#‎CapeFlats‬ as well as being found in the Berg River Valley and Elim Coastal Flats in the ‪#‎Overberg‬. It is classed as ‪#‎Vulnerable‬ on the Red List. #RedListofSouthAfricanPlants 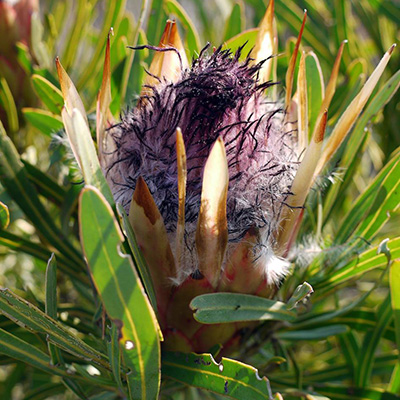 Protea longifolia forms part of the ‪#‎Proteaceae‬ family. It is distributed across the ‪#‎Overberg‬ region from the Hottentots Holland Mountains through to the Agulhas Plain, growing in sandstone ‪#‎Fynbos‬. It is considered ‪#‎Vulnerable‬ on the Red List, with populations having declined by 30% owing to habitat loss predominantly due to habitat loss from commercial Protea cultivation over the last 10-20 years. #RedListofSouthAfricanPlants 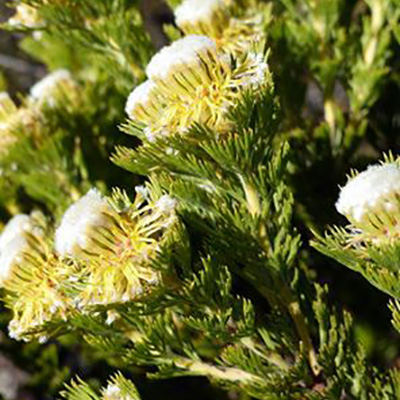 This sweetly scented shrub is ‪#‎Serruria‬ villosa. It forms part of the ‪#‎Proteaceae‬ family and is endemic to Table Mountain National Park. It is more commonly known as the Golden Spiderhead. Serruria villosa occurs south of the suburb of Constantia on the #CapePeninsula on sandy and nutrient poor soils. It is mainly pollinated by bees. The species epithet ‘villosa’ means ‘hairy’ in Latin and refers to the white hairs on the perianth.  #‎Fynbos‬  #RedListofSouthAfricanPlants 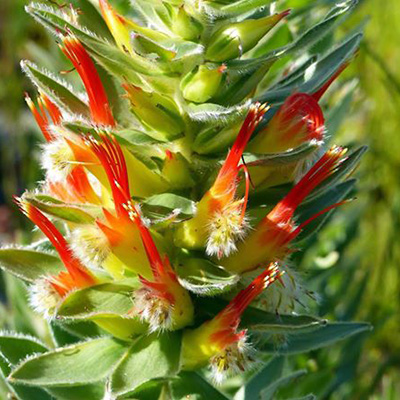 ‪#‎Mimetes‬ hirtus is one of the most spectacular members of the ‪#‎Proteaceae‬ family. It is also known as the Marsh Pagoda or Pineapple Bush. It grows in wetlands and seeps at low altitudes from the #CapePeninsula eastwards to Elim in the southern ‪#‎Overberg‬. It is classed as #Vulnerable on the Red List, owing to habitat threats including urban expansion, alien plant invasion and drainage of wetlands.  #‎Fynbos‬ ‪#‎Wetlands‬  #RedListofSouthAfricanPlants 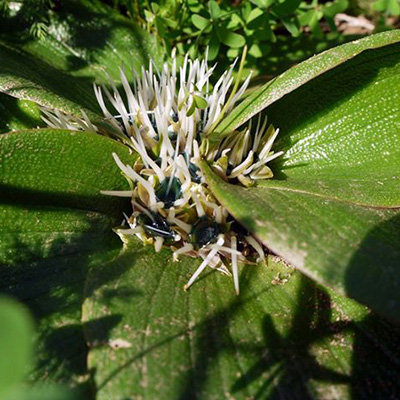 ‪#‎Massonia‬ depressa is more commonly known as the Hedgehog Lily, owing to the brush-like inflorescences that appear during autumn. Massonia depressa shown significant species variation, but in ‪#‎OverbergRenosterveld‬ often is this spectacular turquoise and white form. The flowers produce a yeasty smell and are pollinated by rodents. The genus Massonia is named after Francis Masson, who was sent to the Cape by Sir Joseph Banks to collect plants for RBG Kew in 1772.  #‎Renosterveld‬ 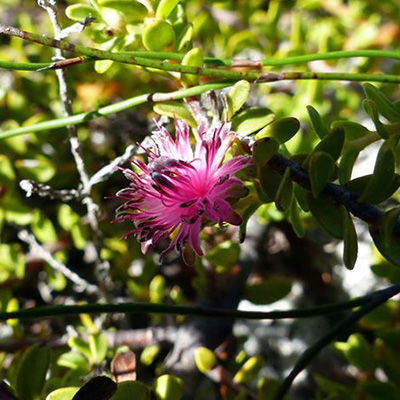 Diastella divaricata is more commonly known as the Peninsula Silkypuff. It is one of the lesser known members of the #Proteaceae family. There are only seven species in the genus. Diastella divaricata is relatively range restricted and endemic to the #CapePeninsula, earning it a status of ‘Rare’ on the Red List. Populations are however stable at present. #Rare  #Fynbos #Proteaceae #RedListofSouthAfricanPlants 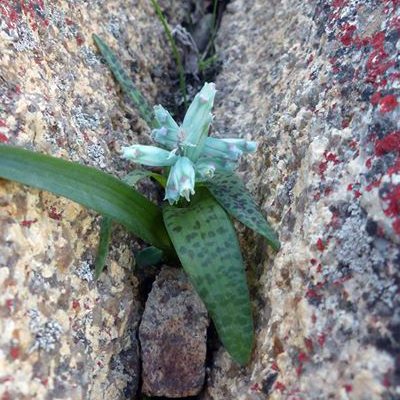 With its turquoise flowers Lachenalia viridiflora is one of the most spectacular species of this genus. It grows in damp cracks in granite boulders and is limited to only two small and fragmented subpopulations at its West Coast home. Lachenalia viridiflora is threatened by illegal collection for the horticultural trade, livestock grazing and habitat loss owing to coastal housing developments. It is considered #CriticallyEndangered on the Red List. #Fynbos #Geophytes #RedListofSouthAfricanPlants 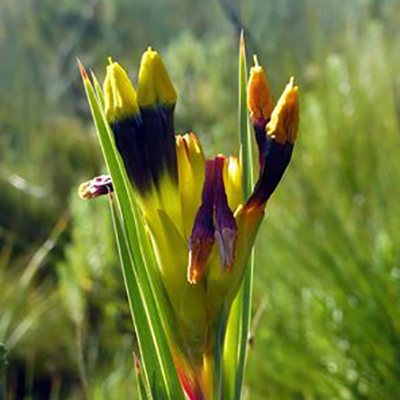 This striking winter-flowering member of the ‪#‎Iridaceae‬ family is Witsenia maura. It is more commonly known as the Bokmakierie’s tail. This species has a distribution from the Cape Peninsula eastwards to Caledon. It grows in wetlands predominantly at low altitudes and is is considered #Rare on the Red List. It is sadly threatened by expanding coastal development. It is pollinated by sunbirds and sugarbirds. ‪#‎Fynbos‬ ‪#‎Geophytes‬  #RedListofSouthAfricanPlants 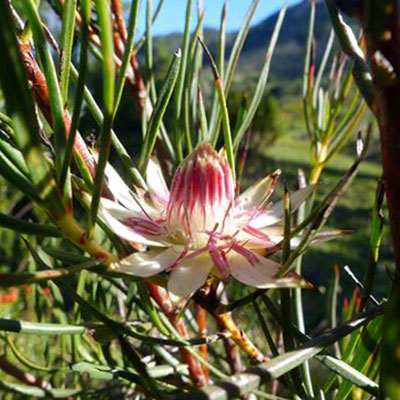 Protea odorata is one of the world’s rarest Proteas. It is classed as Critically Endangered on the Red List and there are only about seven individuals remaining in the wild at just one site. Protea odorata is found in Swartland Shale Renosterveld although formerly also used to occur in Atlantis Sand Fynbos. Luckily for this species seed and material have been collected by Kew’s Millennium Seed Bank Partnership in association with CapeNature and it is now represented in several ex-situ collections. #Fynbos #Renosterveld #Proteaceae #RedListofSouthAfricanPlants 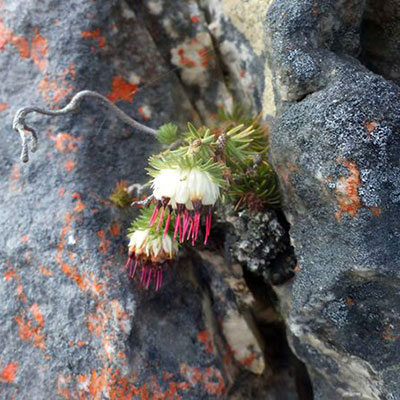 Erica recurvata is endemic to just one range of mountains in South Africa’s southern ‪#‎Overberg‬. The species was only known from a painting by Andrews from the early 1800s until it was rediscovered in 2007 during a botanical survey of the area. These Ericas grow in highly specialised habitat in crevices in sandstone boulders akin to bonsai trees. Sadly their habitat is threatened by growth of alien pine trees. This species is Critically Endangered. #‎Fynbos‬ ‪#‎Ericaceae‬ #RedListofSouthAfricanPlants 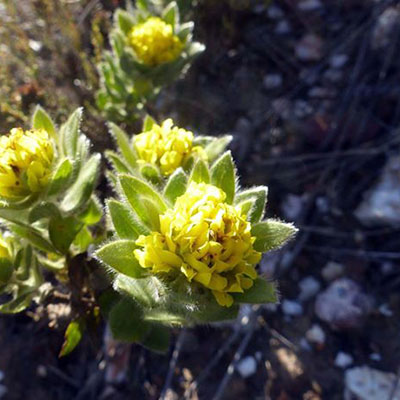 This beautiful shrub from the ‪#‎Fabaceae‬ family is Xiphotheca guthriei. It is known from just ten highly fragmented localities from the Kleinrivier Mountains to Potberg in ‪Overberg Renosterveld‬ on quartz and silcrete geology. It is therefore considered #Endangered on the Red List. Just 4% of the former extent of Renosterveld in the Overberg remains today owing to transformation for agriculture. ‪#‎Renosterveld‬ ‪#RedListofSouthAfricanPlants 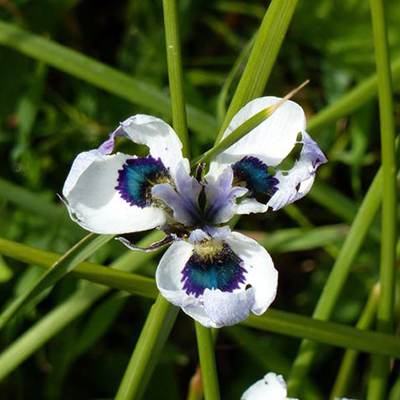 #Moraea aristata forms part of the ‪#‎Iridaceae family. It formerly occurred on clay flats across the Cape Peninsula from Cape Town to Rondebosch. Today Moraea aristata is ‪#‎CriticallyEndangered and at the brink of extinction in the wild. It is known from just one site in the suburb of Observatory where less than 50 plants remain. This subpopulation is non-viable owing to lack of genetic diversity, habitat transformation, invasion of alien grasses and poor seed production. Sadly it may become known only from specialist bulb collections in future.‪#‎Geophytes ‪#‎Renosterveld‪ #‎RedListofSouthAfricanPlants 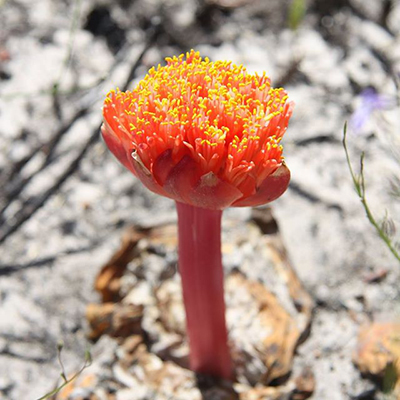 Haemanthus coccineus, more commonly known as the ‘April Fool’ is a late summer flowering fynbos geophyte, with a spectacular paintbrush-like flower emerging from February to April. It occurs from southern Namibia down throughout the winter rainfall zone of South Africa and eastwards as far as Grahamstown. This species was most likely to be the first species collected from Table Mountain, seen illustrated in 1605 by the Flemish botanist de L’Obel. #RedListofSouthAfricanPlants 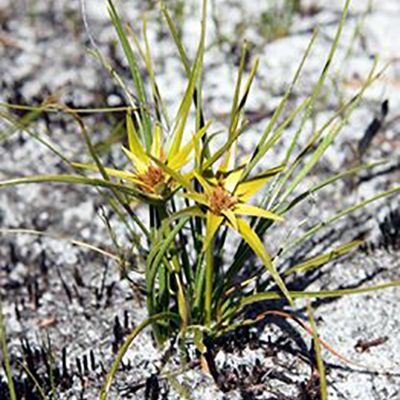 Ficinia radiata is one of the most conspicuous and eye-catching members of this genus. It is common in fynbos particularly after fire on flats and slopes from Ceres to Stilbaai from 200-2,500m, flowering from September to December. Almost all sixty species in the genus are endemic to the Cape Floristic Region. It is also the largest genus of the Cyperaceae family to be found outside tropical South Africa. Ficinias are mainly wind pollinated and the fruits are dispersed by wind and water. This species is also commonly known as the Star Grass. ‪#RedListofSouthAfricanPlants