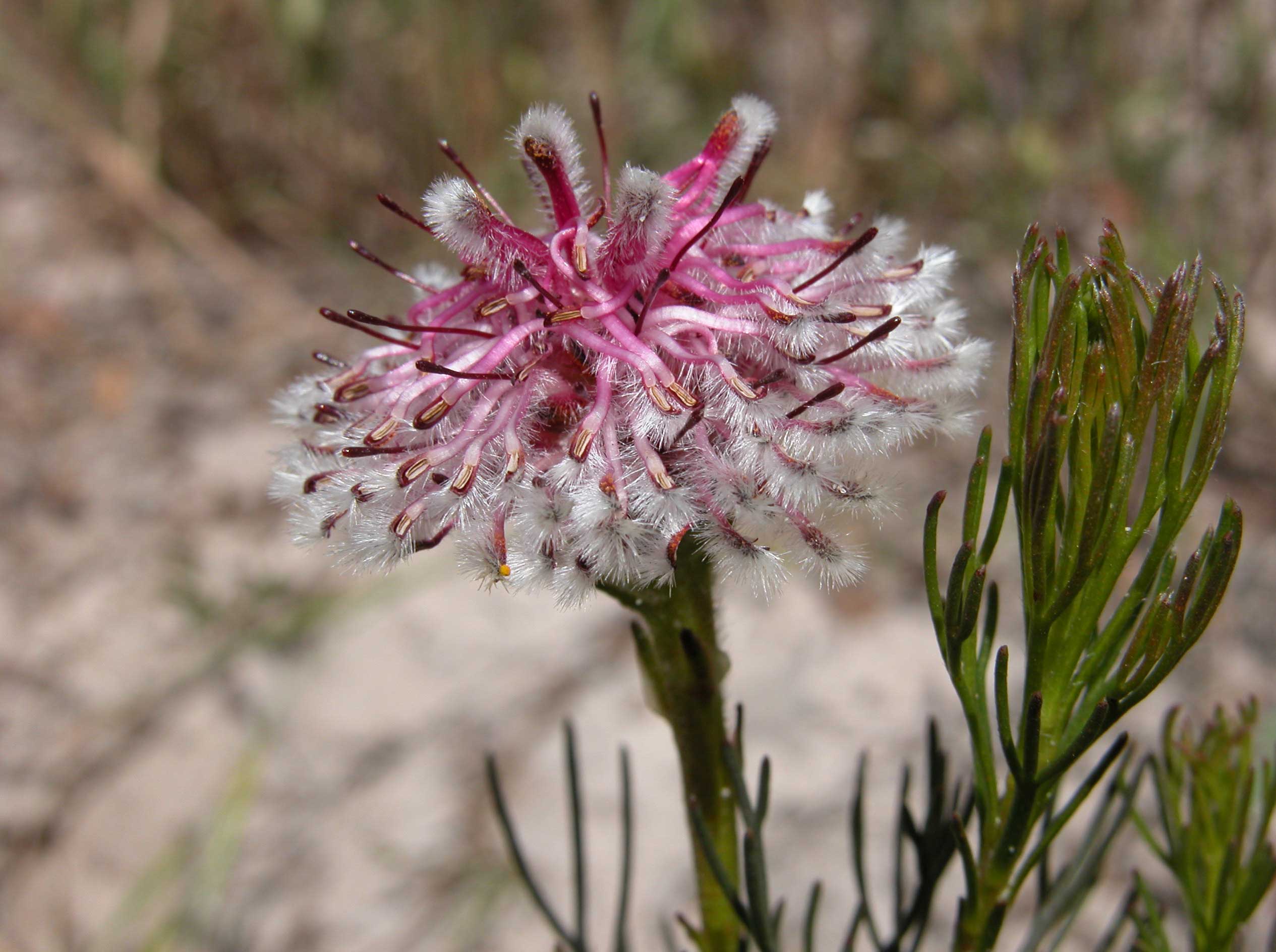 Above: The last individual of Serruria furcellata growing at North Pine on the Cape Flats. Photo: Clifford Dorse.

Have you ever wondered what it would be like to be the last in the world of your kind? There are many species who have experienced this fate in the hands of people. The most famous of these is Lonesome George, a giant tortoise of the Pinta subspecies from the Galapagos Islands.

Despite the best efforts of conservationists, when Lonesome George died in 2012 at the age of approximately 102, the Pinta Island subspecies of giant tortoise died with him. I was lucky enough to meet Lonesome George at his last home at the Charles Darwin Research Station during a stint of volunteering in the Galapagos Islands during my teens, and it is a memory that has stayed with me.

There is another species that was at the brink of being lost forever, with one last lonely individual in the world, much closer to my front doorstep in the Mother City. Serruria furcellata is a member of the Proteaceae family and is more commonly known as the Kraaifontein Spiderhead. It is endemic to Cape Flats Sand Fynbos, a Critically Endangered vegetation type that only occurs within the boundaries of the city of Cape Town, one of South Africa’s largest urban areas.

As a result of a plethora of threats including urbanisation, alien plant invasion, mowing and invasive alien ants this species declined in number. Serruria furcellata is thought to have had a relatively small natural range, extending between Brackenfell, Bottelary and Kraaifontein, with its sister species Serruria trilopha being thought to have occupied a similar niche further west and north.

By 1985, Serruria furcellata was known from just two sites, one near Kraaifontein and another adjacent to the Bottelary Hills, where by 1979 just three plants were recorded. In 1985 this species was thought to be extinct, with efforts to relocate any remaining plants being to no avail. In 2004 two plants were rediscovered at North Pine, but this excitement was short-lived when one of these two remaining plants was destroyed by municipal brush cutting. 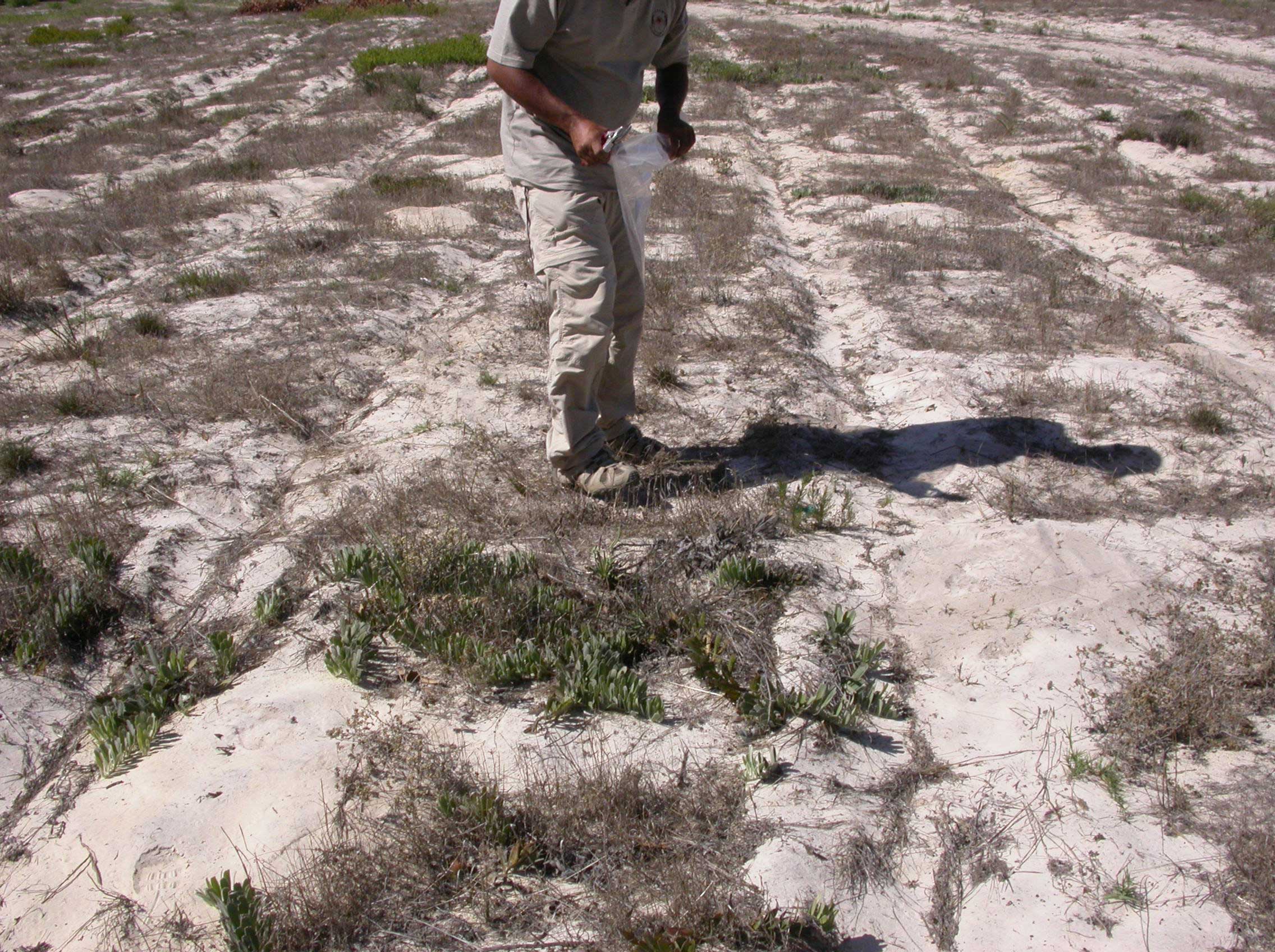 Above: The last Serruria furcellata at North Pine in 2005 after the site had been brushcut by the local municipality, destroying the one other remaining plant of this species. Photo: Anthony Hitchcock.

The Cape Flats Sand Fynbos of the Cape Flats is an ecosystem and habitat under siege. A total of six species are already extinct, known only from herbarium specimens. The majority of land that was once this habitat is now lost under housing and other urban development. Only small fragments remain.

One of the most well-known of these is Rondebosch Common, popular with recreational users from dog walkers to bird watchers. There is also the Kenilworth Racecourse Conservation Area, which lies within the centre of the racetrack and is home to the Critically Endangered microfrog and numerous other threatened species.

Unlikely though it seems, more than a hundred species also hang on at the interchange between the N1 and N7 freeways as traffic speeds past towards its destinations. Further south lies Rondevlei Nature Reserve, better known for its birding than Critically Endangered vegetation. 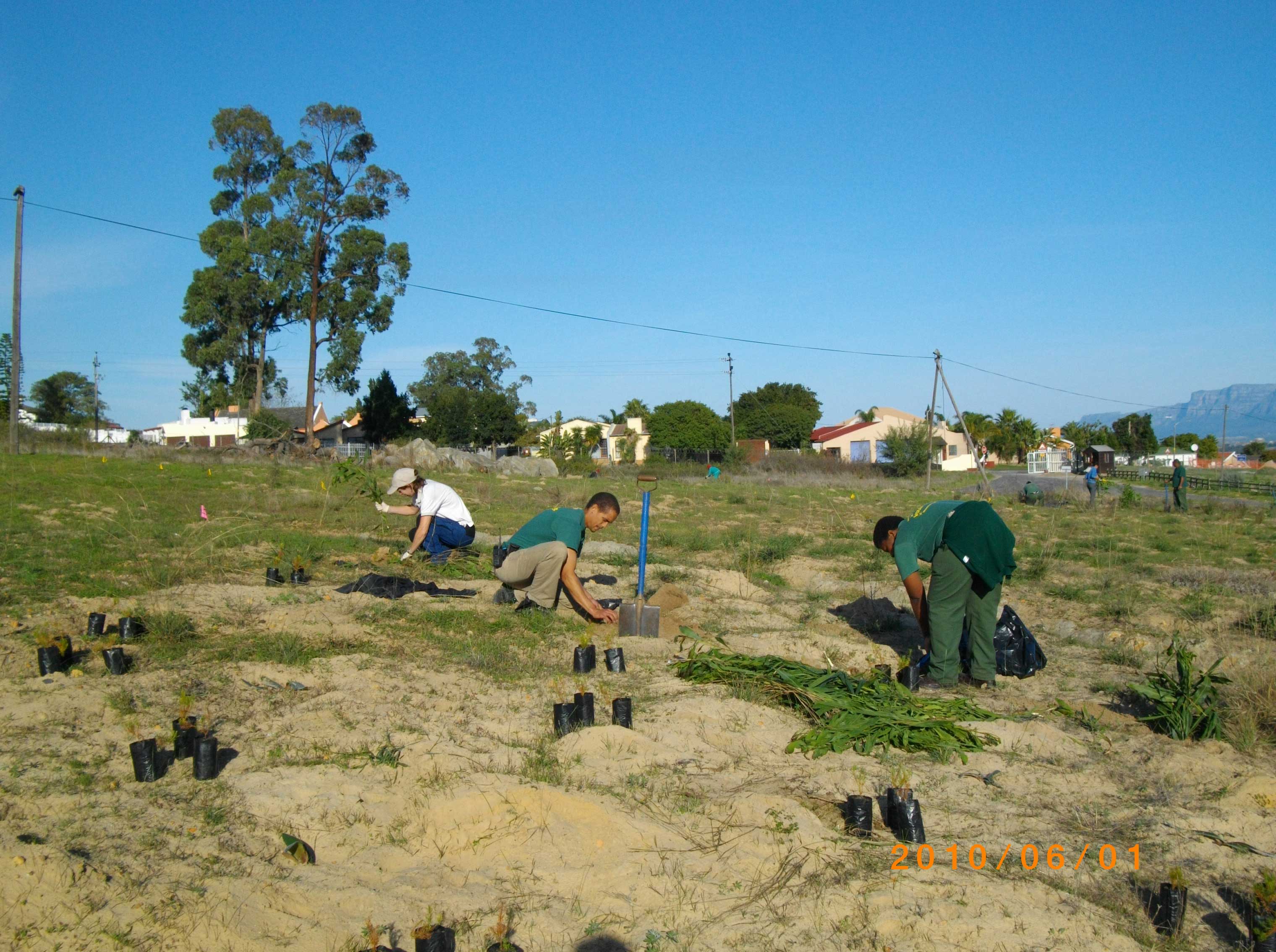 But back to our poor lonely Serruria furcellata. What has been done to try to bring this species back from the brink of extinction? The first person to propagate this species successfully was Barrie Low at the University of the Western Cape (UWC).

The horticultural teams at Cape Town’s Kirstenbosch National Botanic Garden have repeatedly attempted to increase numbers of this species ex-situ through propagation from cuttings. Kirstenbosch has two different clones in cultivation, one from UWC and another from the remaining plant left at North Pine. Initial attempts were stalled by the plant’s reluctance to adapt to a life in captivity, not growing well either in pots or the display garden.

Greater success was later achieved by growing cuttings in well-drained stock beds with minimal irrigation. Plants from that cultivated stock were then reintroduced to Bracken Nature Reserve, the nearest conservation area to its original home at North Pine.

Unfortunately, this has shown limited success as Bracken Nature Reserve is on drier habitat at a greater elevation than the North Pine site. Another subpopulation has also been established on a smallholding in Brackenfell, but at present, these plants are not producing viable seeds. Some plants have also been reintroduced to the original site at North Pine, but efforts by the City to establish a nature reserve at the site have been unsuccessful. 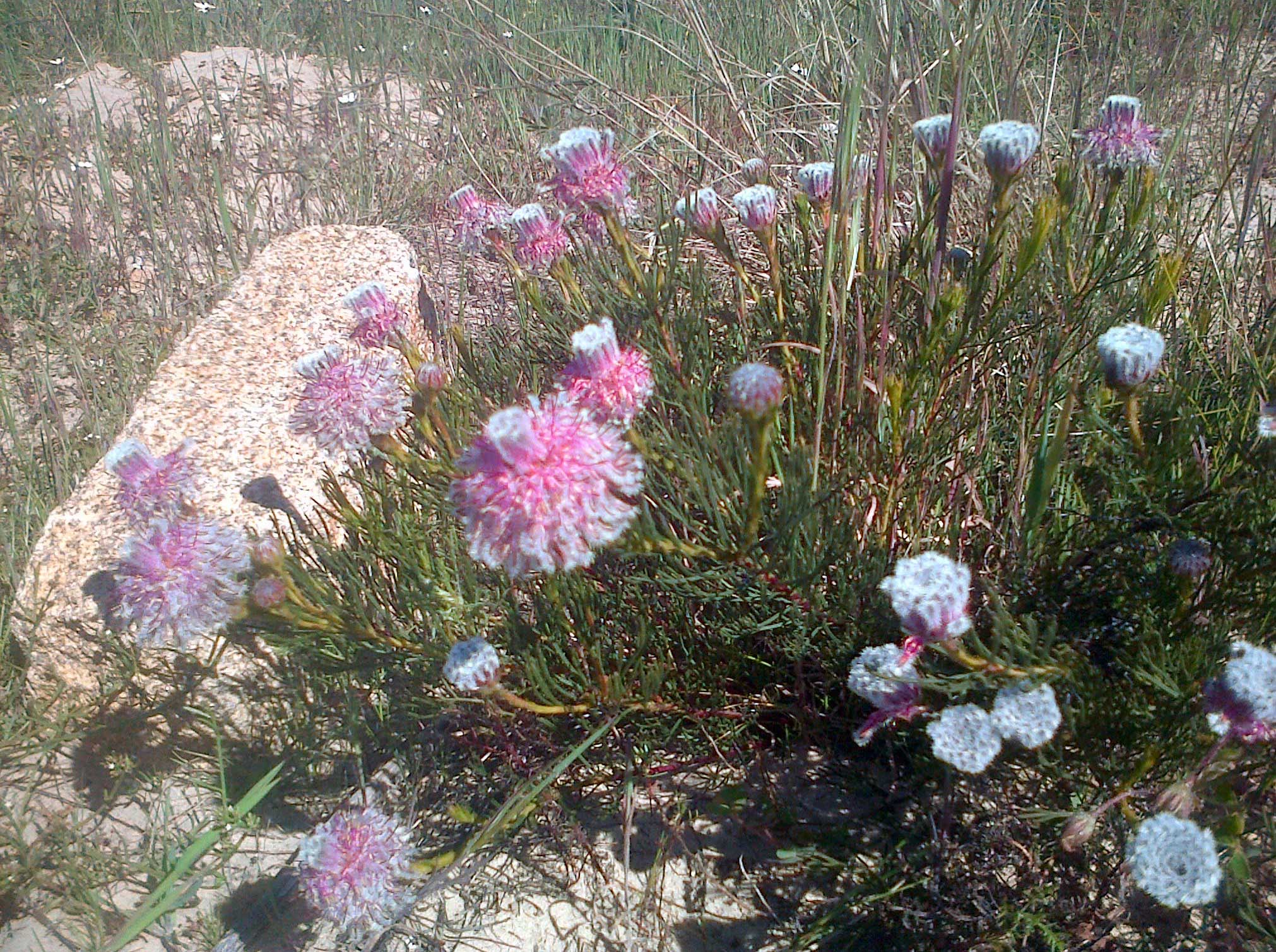 Conservation staff from the City of Cape Town are therefore working hard in collaboration with staff from Kirstenbosch NBG to find another site within the original distribution range to reintroduce Serruria furcellata.

Kirstenbosch horticulturalists are meanwhile busy building up cultivated stock for future reintroduction to the wild as well as collecting seed for storage in Kew’s Millennium Seed Bank in the UK. Serruria furcellata is a resprouting species and so naturally has minimal viable seed set, making building up stocks of viable seed of this species a painfully slow process.

This highlights the importance of both ex-situ cultivation in bringing threatened species back from the brink as well as of restoration as vitally important conservation tools. However, the most effective way to conserve any species is in its original habitat. If all the habitat within a species’ former range has been lost, then we are often left with a plant that can only survive in a botanic garden as cultivated stock, like an animal in a zoo.

We cannot undo the urbanisation that pushed Serruria furcellata to the brink of extinction. However, there are many other species from Cape Flats Sand Fynbos that could face the same fate if we don’t fight to effectively conserve what remains of this vegetation endemic to the greater Cape Town area.

Restoration of Cape Flats Sand Fynbos from soil stored seed banks at Lower Tokai is critical to help many of these species to survive.  We need to act now to ensure these species survive for future generations to come.