This week the normally quiet Cape Town suburb of Tokai has been the centre of attention. It has made front-page news in the papers and social media has been buzzing. Placard waving protestors, their families and their dogs lined the side of Orpen Road with residents queuing to sign petitions. Tears have been shed and emotions have been running high.

The reason behind all this activity is pine plantation felling taking place in Tokai Park. The plantation is on state-owned land and the trees are owned by the company MTO forestry. A national government decision was taken for an exit for the forestry industry from the Western Cape, with plantations within the Cape Town area to be harvested.

The pine plantations were burnt during the 2015 Cape Town fires and harvesting was brought forward and has now begun. Unfortunately, this has been less than popular, causing an outcry among the locals who have had the luxury of walking in alien pine tree shade there since they can remember. Change is afoot and it hasn’t been universally welcomed. 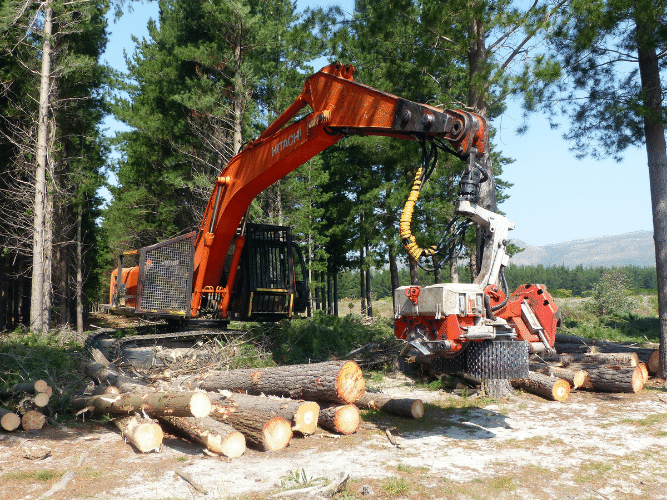 Above: Harvesting begins at the pine plantation at Tokai Park, in preparation for restoration to Cape Flats Sand Fynbos. Photo © Zoë Chapman Poulsen.

Pine plantations are actually very unfriendly to the environment, using up precious water resources (as much as 40-50 litres per tree per day), causing a dangerous fire hazard (as shown during the Cape Town fires in 2015) and a loss of biodiversity. They are bad news for ecological integrity and have no place in any conservation area. They may provide shade, but at what cost?

Tokai Park is one of few places where we have a full record from 1917-1919 of the flora that used to occur at the site prior to transformation to become a pine plantation, thanks to the comprehensive work of zoologist and arachnologist William Frederick Purcell of the adjacent Bergvliet Farm. During his survey he recorded nearly 600 plant species, highlighting the tremendous diversity of the vegetation at Tokai and on the Cape Flats.

There seems to be a common misconception among those protesting against the pine trees being felled that the fynbos can be put elsewhere. This sadly slows a grave lack of understanding of the facts. South Africa’s Fynbos Biome is home to a vast plethora of different vegetation types, changing according to geology and between the lowlands and the mountains. Each of these vegetation types has its own unique assemblage of species. 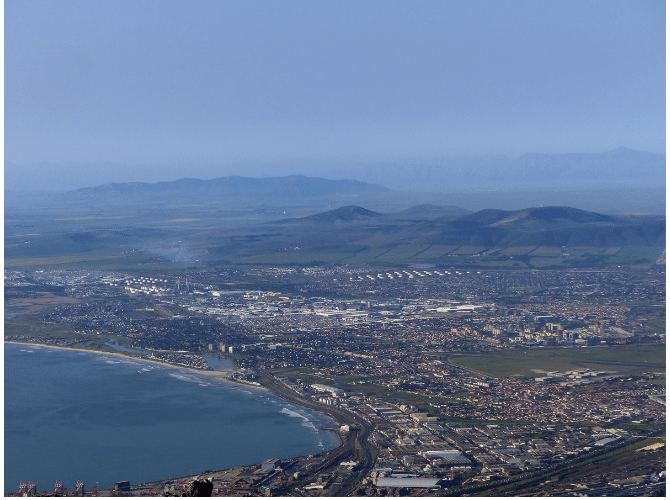 Above: Over the last 200 years, the majority of habitat for Cape Flats Sand Fynbos and other lowland vegetation types occurring in the greater Cape Town area has been lost to urbanisation and transformation for agriculture, leaving just small fragments of natural vegetation behind. Photo © Zoë Chapman Poulsen.

The lowland vegetation types of South Africa’s Fynbos Biome has been predominantly lost due to urbanisation and transformation of land for agriculture. The decline is ongoing also due to other threats such as invasion by alien vegetation.

More than 100 other species that call Cape Flats Sand Fynbos home are now also threatened with extinction. This makes it one of the world’s most threatened vegetation types. There are only six other countries on earth that have a greater number of threatened species than the city of Cape Town alone.

To put this loss of biodiversity in a global context, in the journal ‘Science’ an international team of scientists reported that the earth’s biodiversity is dropping below safe levels for the support and wellbeing of human societies. These findings further highlight the importance of restoring and rehabilitating any threatened ecosystems wherever possible. So what are South Africa and its conservation community doing about this?

South Africa is one of many countries leading the way in conservation by becoming a signatory to the International Convention on Biological Diversity (CBD). As part of this, it has committed to implementing a national strategy to conserve its flora in line with the Global Strategy for Plant Conservation that forms part of the CBD. An important part of this national strategy is restoring threatened ecosystems where possible. So how does this affect management at Tokai Park?

Tokai Park is one of the only places in Cape Town’s Southern Suburbs where transformed Cape Flats Sand Fynbos vegetation has a soil seed bank remaining, meaning it can be restored without the need to bring back the majority of plant species through active restoration techniques such as artificial re-seeding and re-planting.

Tokai Park is also the largest remaining restorable fragment in this part of the city and is the only remaining fragment where a corridor is present between lowland and mountain fynbos vegetation on the Cape Peninsula. This area is therefore of vital international conservation importance.

This has been recognised accordingly and as MTO have harvested their plantation trees, block by block the land has been handed over to SANParks for restoration work to begin. As soon as all plantation trees have been harvested, the land will go through the process of being proclaimed and incorporated as part of Table Mountain National Park and the UNESCO World Heritage Site, which recognises all protected areas in the Fynbos Biome on a level of importance with the Grand Canyon and the Galapagos Islands. 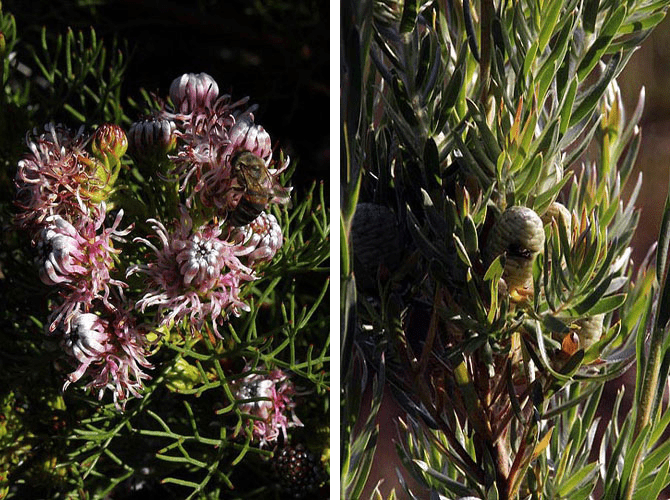 Restoration work at Tokai Park has been highly successful, with more than 350 plant species coming up from the seed bank after burning in this small area. This is more than the total flora of the South African section of Kruger National Park. Many of these species are listed as threatened on the Red List of South African Plants because of habitat loss on the Cape Flats.

There are some species known to have occurred at the site from William Purcell’s list that have not survived in the soil seed bank and these have been reintroduced at the site and are growing well. These include some species at the brink of extinction, such as Serruria foeniculacea with a total population formerly reduced to just four plants in the fence at Rondevlei Nature Reserve, as well as Leucadendron levisanus and Leucadendron floridum, both of which are critically endangered. 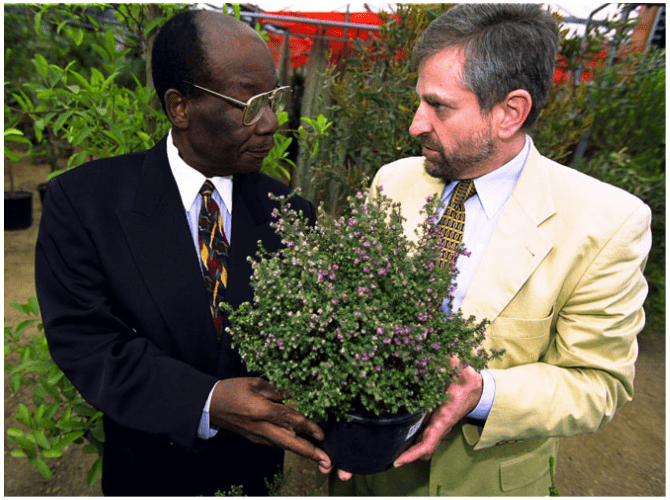 Above: Official ceremonial handing over of Erica turgida (Extinct in the Wild) by the Austrian Minister of Agriculture and the Environment Dr. Wilhelm Molterer to the South African Ambassador Professor Alfred T. Mohleah. Photo: South African National Biodiversity Institute.

The restored Cape Flats Sand Fynbos at Tokai Park has also provided a new home for two very special Erica species, both of which are now extinct in the wild from habitat loss on the Cape Flats.

The last wild population of Erica turgida disappeared under a new branch of Macdonalds in Kenilworth, swapping precious biodiversity for fast food. Luckily before it was lost forever it was collected by Elsie Esterhuysen in the 1970s and survived in the living collections at Kirstenbosch National Botanic Gardens. Further material was later secured from Schonnbrunn Botanic Gardens in Vienna, thought to have been collected from the Cape in the 1790s. 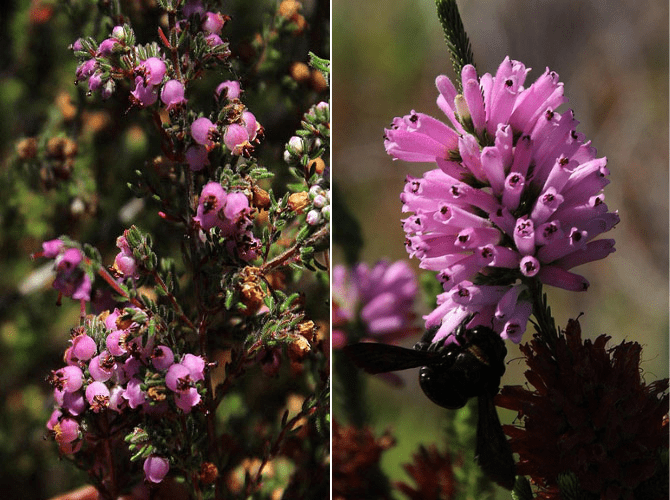 The beautiful Erica verticillata became extinct in the wild as a result of cut flower harvesting and habitat loss from urbanisation but was later rediscovered years later in cultivation in a number of botanic gardens, including Tresco Abbey Garden on the Isles of Scilly and Royal Botanic Gardens Kew in the UK.

A total of eight different forms of Erica verticillata made their way back to South Africa and this species has now been reintroduced at several sites, the largest of which is at Tokai Park. Here it has proven highly popular with the local wildlife, attracting numerous orange-breasted sunbirds who visit regularly to feed on its nectar. 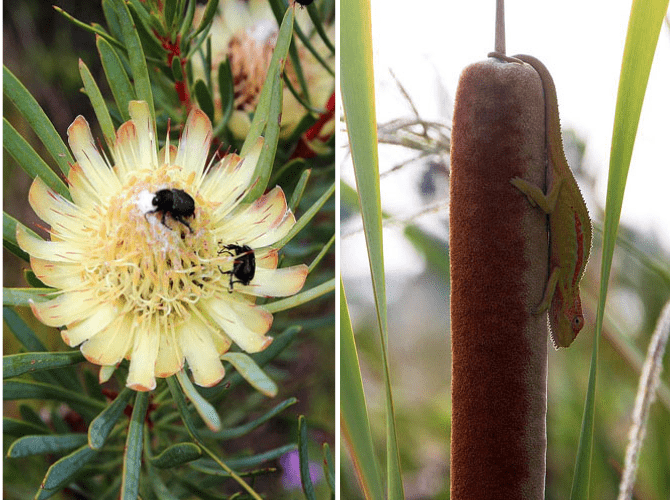 These are by no means the only wildlife who have moved back in following the restoration of Cape Flats Sand Fynbos at Tokai Park. Spotted eagle owls have already been recorded breeding in the fynbos. There are also numerous different rodent species, Cape rain frogs, Cape sand toads and the endangered Western Leopard Toad which breeds in the Tokai Park wetlands.

A species of monkey beetle not seen since the 1940s has returned to Tokai Park and has been seen on plants of Protea scolymocephala. Caracal, Cape Fox and Cape porcupines have also been recorded. The majority of this wildlife occurs within the restored fynbos sections of Tokai Park rather than the pine plantations, which represent a monoculture desert with virtually no life. 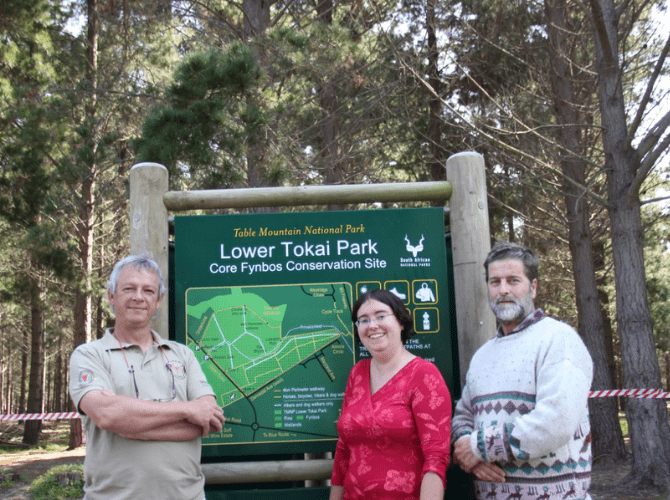 Given all of these conservation successes and the international importance of Tokai Park for Cape Flats Sand Fynbos, it seems ludicrous that the local community sees fit to oppose clearance of these pine plantations and further restoration work. It is sad that they are so misinformed.

It shows we have a long way to go in raising awareness about the vital importance of South Africa’s natural heritage and the biodiversity of the Cape Floristic Region. I hope they will soon see sense so that restoration work can continue to conserve the precious biodiversity and threatened species of Tokai Park in perpetuity for future generations.