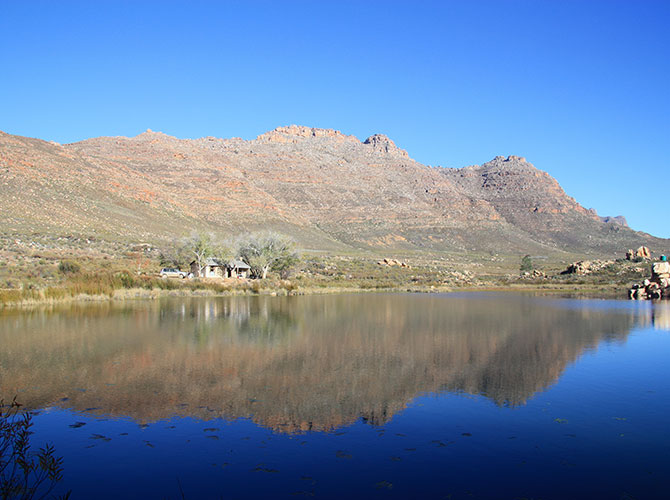 A bitterly cold winter weekend in June brought us to the Cederberg Mountains which are a three-hour drive to the north of Cape Town. This beautiful and rugged range is 100 km in length and is known for its spectacular sandstone rock formations (such as the Maltese Cross and the Wolfberg Arch), ancient San rock art and is the home of rooibos tea!

The shy Cape leopard is fairly common here but rarely seen. The highest peak in the area is Sneeuberg at 2,026m asl. which is one of only two mountain peaks in the area that is home to the  Cederberg endemic Snow Protea (Protea cryophila).

The Cederberg’s most well-known endemic species the Clanwilliam Cedar (Widdringtonia cederbergensis) was the primary reason for our visit. This tree used to be common throughout the higher altitude parts of the range (above 800m asl.) but for reasons that continue to mystify botanists, it is dying out at a rapid rate and lies at the brink of extinction. Key reasons cited include climate change coupled with an increase in the frequency of high-intensity fires. It is classified as Endangered according to the Red List of South African Plants.

Our group set out in convoy from Cape Town on a cold but clear Friday afternoon. As night fell we came to an abrupt stop near Kromrivier as we encountered a flooded drift that looked too deep for our vehicles to cross.

A freezing late-night dip unfortunately proved inconclusive. We placed a rock at the edge of the water to find out if the water was subsiding but it soon disappeared as the water continued to rise. Luckily our patience was eventually rewarded and we crossed while piled on top of each other in the bakkie.

We came to the Cederberg that weekend to attend one of two annual Clanwilliam Cedar tree planting events. This one was organised and sponsored by CapeNature, Just Trees and Red Expresso and held at Eikeboom near Sandrif.

This important initiative was started by the Western Cape Nature Conservation Board (WNCB) in the 1980s, but unfortunately owing to lack of funds the project had to be abandoned. However, the nursery and planting programme was re-established in the late 1990s through a collaboration between the WNCB, the Botanical Society of South Africa and Flora and Fauna International as part of the Global Trees Campaign.

Top: Warming up at our fire. Above: Widdringtonia cederbergensis in habitat in the Cederberg mountains. Photo © Zoë Chapman Poulsen.

The programme is now in the hands of CapeNature and Just Trees and is going from strength to strength. Over sixty people attended the Eikeboom tree planting event (see group photo below) and we planted a total of 175 cedar trees.

It was a bitterly cold day with a wind chill of -2C and a dusting of snow on the surrounding high peaks. We hiked up the nearby jeep track that wound its way up into the mountains to our planting site while rewarded with spectacular views. At this year’s event, the trees were planted a distance of 5m apart in order to decrease the likelihood of the new population being destroyed by intense fire in the future.

After a highly satisfying morning of tree planting, we meandered our way back down to the bakkies in time for a delicious and hearty free lunch of soup and roosterkoek (fire-baked bread rolls for those not in the know) which went down very well on such a cold day!

I couldn’t commend more highly the efforts of those involved in organising the event and it represents the perfect opportunity for the community to give a little to conserve this beautiful and charismatic tree. It was an incredibly worthwhile way to spend a weekend. We spent the remainder of the time making the most of what the Cederberg mountains have to offer, from wine tasting to hiking to just chilling by the braai with good company.