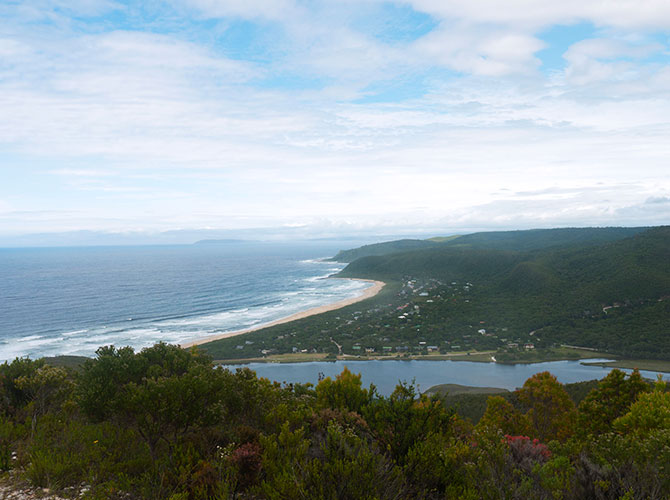 In early January of this year, we decided to abandon the Mother City and take a long-overdue holiday. What better than to hike the Tsitsikamma Trail, one of the classic trails of the Garden Route?

This stunning six-day 60 km hike begins in the small village of Nature’s Valley, wending its way from close to the lagoon mouth up through the spectacular afrotemperate forests typical of the region onto the plateau above before weaving its way through the peaks and forested valleys of the Tsitsikamma Mountains. Sounds idyllic. What could go wrong?

The Southern Cape Coastal region of South Africa from Mossel Bay in the east to Storms River Village in the west is known as the Garden Route. The area has an oceanic climate which is known for being one of the mildest in the world after Hawaii. Temperatures rarely climb above 28C in the summer or fall below 10C during winter. The area also experiences year-round rainfall. Which meant that our glorious hike along the Tsitsikamma Trail was to be rather soggy.

The rain started as we left Cape Town. And it rained, and it rained, and it rained some more. As we crawled forwards blindly along the N2 eastwards through the Overberg it was impossible to see more than a couple of metres in front of the car. Everyone around us was moving slowly forwards towards the flashing hazard lights of the car in front of them, with no other clues of where they should be going. Nine hours later we eventually arrived in Nature’s Valley.

The Tsitsikamma campsite was making the very best of a bad lot, complete with crowds of soggy summer holidaymakers in soggy tents with their soggy families. Everyone was hunkered down with their hot chocolate at the campsite’s lapa for the weekly movie night when we arrived. It took all our self-discipline to leave them behind and head out into the rain and the dark to the first hut on the trail, slithering with awkwardness and determination down steep slopes and across several streams.

To our huge relief, the next day dawned bright and clear as we headed upwards from Kalander Hut up onto the plateau above Nature’s Valley, with the reward of magnificent views eastwards along the coast over the Grootrivier Lagoon and westwards towards Robberg Nature Reserve. This rugged and exposed peninsula is an important Middle and Later Stone Age archaeological site and was first occupied by Strandlopers no less than 120,000 years ago.

These coastal communities survived by shoreline foraging and leave a legacy of middens containing remains of shellfish, pottery, whale and seal bones. During the last Ice Age, sea levels were much lower and extensive grasslands dominated the landscape, grazed by giant Cape horses, giant buffalo and giant hartebeest. These prehistoric mammals became extinct approximately 10,000 years ago.

As we hiked across the plateau towards the foothills of the Tsitsikamma Mountains, the rain set in and the forest closed in around us once again. We were treated to the sight of a huge leopard tortoise strolling through the trees next to the trail. These beautiful spotted beasties are the fourth largest species of tortoise in the world and can live up to a hundred years or more.

The Garden Route region is home to some of the most extensive areas of forest in the country. These afrotemperate forests are of national importance and are between 3 and 7 times richer in tree species than other temperate forests in the Southern Hemisphere.

They are still home to specialist forest dwellers such as the Blue Duiker (classed as ‘Vulnerable’ on the IUCN Red List), leopard and the elusive and nearly extinct Knysna elephant. It is easy to see as we tramped onwards through remote areas of forest in torrential rain and swirling mist how this wildlife is so seldom seen.

It wasn’t good news the next day. The morning had dawned bright and clear but with several days of heavy rain and more on the way we were advised by the trail organisers that we needed to hike out the escape route and skip a day of the trail in order to avoid the strong likelihood of being stranded between two major rivers in flood at the next hut.

Apparently, a previous group had ignored this advice during bad weather and were stranded for several days within sight of the next hut on the trail but on the wrong side of a raging torrent with people having to pass food to them across the river. Not an experience we planned to repeat.

After a short hop by shuttle bus along the N2 and a long plod through forestry plantations, we were back in the mountains and safely nestled in Heuningbos Hut armed with a surplus of peanuts and raisins and laughing cow cheese to get us through the next soggy day while waiting for the weather to clear. Eventually the next day our bags were packed and we were on our way again to the final hut of the trail at Sleepkloof.

Tired, aching and soaking wet we plodded onwards through the rain, drinking tea, nibbling cereal bars and peanuts as we went to keep energy levels and morale up without daring to open our packs to expose our last precious sets of dry clothes inside. A couple of hours later we realised the trail was taking us down towards the sound of a roaring torrent of water, the final major obstacle between us and a warm dry hut at the other end.

The Witte River was deep and flowing fast, but just about passable with the assistance of the stronger members of our group in combination with an overhead rope. Holding on tightly we waded into the thigh-deep water. Luckily the current wasn’t too strong and we were able to maintain our footing on the slippery rocks beneath the water to reach the other side.

Top: Storms River Village at the end of the trail. Above: Spongebob always bringing a smile despite the appalling weather. Photo © Zoë Chapman Poulsen.

We then launched into the final ascent of the Tsitsikamma Trail, winding gradually upwards towards the nek high above. A misplaced step landed me flat on my face in the mud as the rain pelted down. A few minutes later and a hand up and we were on our way once again towards the top. About half an hour later we reached the nek and collapsed among the rocks for a well-earned break.

As we munched our way through our last rations of chocolate suddenly the rain stopped and the cloud cleared, to reveal stunning views over the surrounding mountains and down over swathes of forest towards the last hut and the Storms River Petroport at the end of the trail. Never in my life have I been so relieved to see a petrol station.

After several days of wall-to-wall rain, the sun finally decided to stay with us as with renewed purpose and determination we hiked onwards towards the final hut on the trail. Never was the satisfaction sweeter as we passed through the last forest and crossed the last few streams past stands of huge and primitive-looking tree ferns (Cyathea dregei) to reach the hut that night.

Desert that night couldn’t have been more perfect: brandy and melted chocolate acted as a dip for marshmallows as we looked forward in the morning to the last couple of kilometres of the trail to reach our destination and waiting car, ready to take us home.

Above: Landscape of the Tsitsikamma Mountains with forest down in the kloof far below us in a rare moment when the sun emerged. Photo © Zoë Chapman Poulsen.

It was hard to believe our rollercoaster ride of endless rain, raging torrents of water and mud was almost over. Despite that, I still wouldn’t swap our experience of the exquisitely beautiful Tsitsikamma Trail for a week at my desk.

We all agreed afterwards as we sat at Nature’s Way Farmstall with purring cats on laps and enjoying well-earnt afternoon tea that we would be back again, to experience the trail in its completeness and hopefully in a less wild mood in the future.