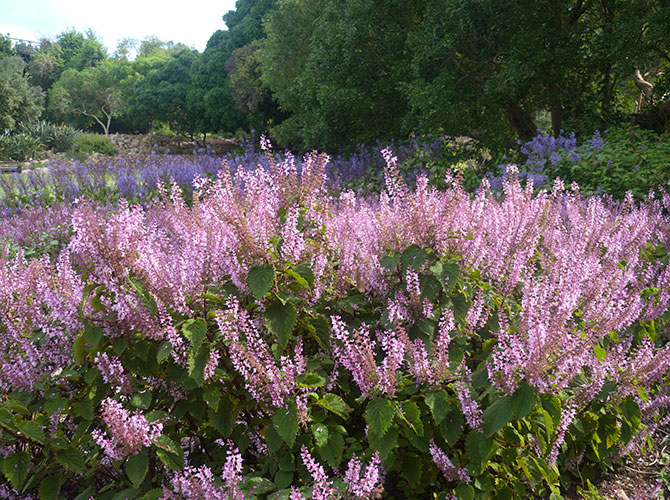 One of the highlights of any visit to Cape Town’s Kirstenbosch National Botanic Gardens in April is the carpets of Plectranthus flowers occupying every available shady corner at this time of year. Colours vary from white to pale pink to the deepest dark blues and purples with species of every height, form and variety being cultivated under the shadow of Table Mountain’s eastern buttresses and crags.

This Old World genus of plants is more commonly known as the Spurflowers. They are a part of the Lamiaceae family, alongside the mints, sages and basil of the Mediterranean Basin.

Plectranthus, like these other family members, have a distinct variety of aromas, from the vile, skunk-like odour of Plectranthus neochilus which is believed to scare snakes away from human dwellings, to Plectranthus unguentarius which is used as a deodorising ingredient in the red ochre body lotion of the Himba Tribe of Namibia’s Kaokoveld.

In addition, Plectranthus esculentus is also known as the African Potato or Unbondwe. This potato-like crop is rich in starch and provides a highly drought-tolerant food source.

However, the majority of the genus Plectranthus are most well-known for their horticultural value, growing easily in the darkest and shadiest corners of gardens in Southern Africa and beyond. Kirstenbosch horticulturist Dr Ernst Van Jaarsveld has undertaken a plethora of expeditions all over the subcontinent to bring numerous species from this genus into cultivation. The legacy of his efforts blooms throughout the National Botanic Gardens to this day.

In the wild Plectranthus can be found in a variety of habitats, from high altitude grasslands to dry savannas but the majority are forest dwellers. They most commonly occupy the understorey and are adapted to frequent disturbance by wildlife such as bushbuck and porcupines. There are several species that grow at high altitudes in the Drakensberg Mountains that have adapted to the cold by resprouting from an underground tuber after frost.

Closer examination of some of the taller stands of Plectranthus growing in Kirstenbosch National Botanical Gardens will reveal the golden glistening threads of the web of the Golden Orb Spider. This beautiful spider is so named because of the colour of its silk, which is used to spin webs of impressive size, reaching as much as six metres across.

The silk is of extraordinary strength and this spider’s webs have been known to trap creatures as large as small birds. It is thought that the colour of the silk is such in order to attract bees which are attracted to the golden threads as well as blending into the shade with background foliage to act as an effective camouflage to deceive other insects into being ensnared.

Despite its formidable size, this spider is relatively harmless and will only bite unless severely provoked. In the highly unlikely event of a bite, the venom can cause local pain, redness and blistering which usually dissipates over a 24 hour period. However, in some rare cases being bitten can cause a severe allergic reaction, triggering respiratory difficulties in those suffering from asthma or fast-acting involuntary muscle cramps.

The most commonly seen of the Golden Orb Web Spider are the females, which have an abdomen of up to 30 mm in length. The females dwarf the males of this species sixfold: the latter is only 5 mm in length. Owing to his diminutive size, the males are often at risk of being cannibalised by the females after mating.

In order to avoid this, crafty tactics are necessary: The male will either approach the female when she is already feeding or present her with food to distract her. When her attention is diverted elsewhere, the male will then fertilise the female before retreating to a safer distance out of harm’s reach. The path to true love can be terrifying. Look out for this fascinating species next time you visit Kirstenbosch.